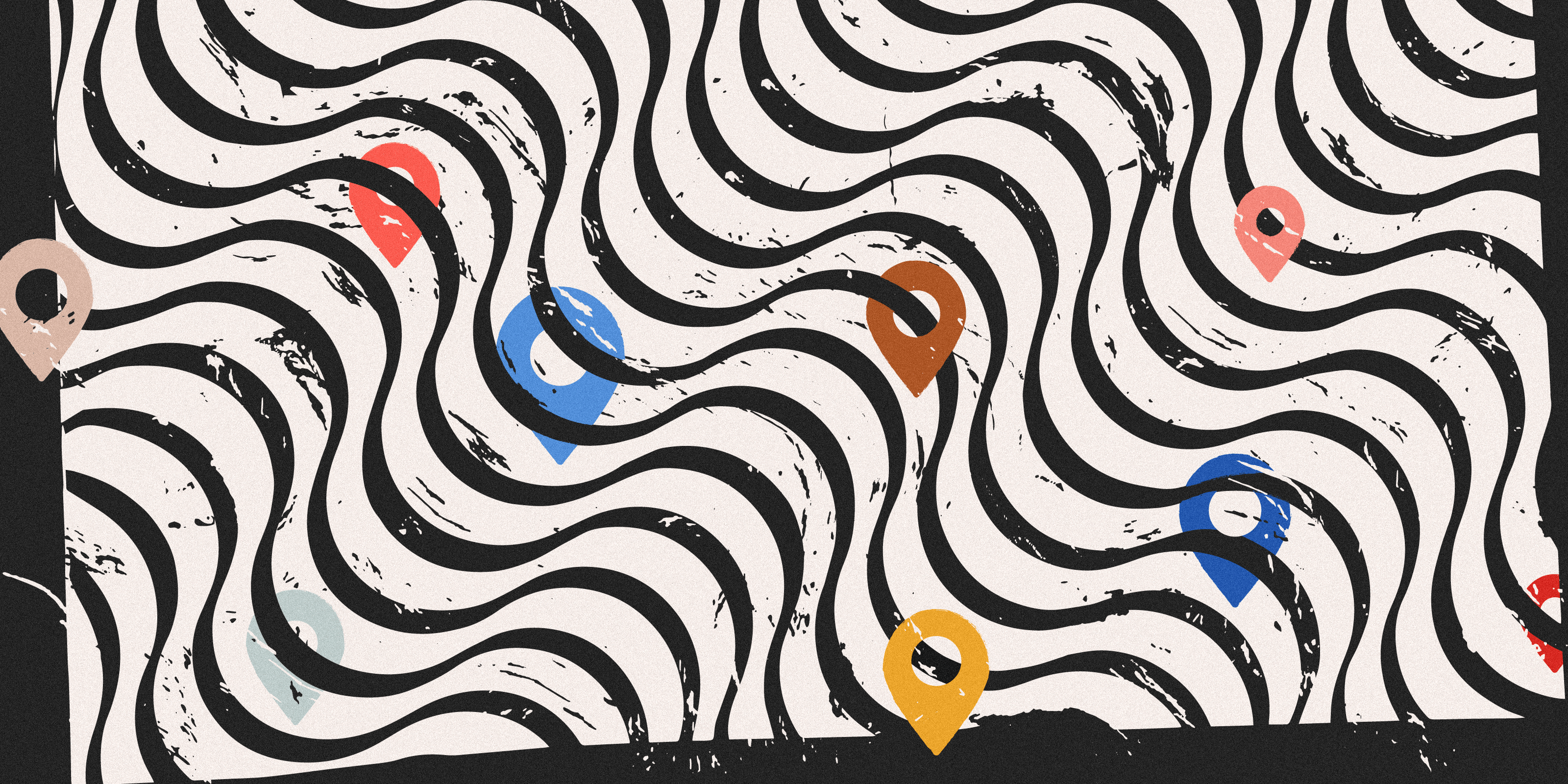 The show Silicon Valley opens up with this great illustration of miniature buildings and logos representing the giants of the tech industry: Alphabet dominates, Uber and Lyft battle it out, and Facebook looms in the shadows. You won’t see Abstract’s logo here. We’re not building a typical Silicon Valley company. Our company is remote-first and will always be open to employees to work anywhere in the U.S. (or the occasional trip abroad). We made this decision with a great deal of intention because we believe creating and nurturing a remote culture is a key to inclusion. Inclusion, as we’ve shared, makes our company more resilient by increasing the diverse inputs and perspectives of our team, letting us create better products. It’s also the right thing to do.

We believe that technology is for everyone and that tech career opportunities shouldn’t only be available to people from a specific background, geography, gender, orientation, age, ability or socio-economic status. For companies, that exclusive mindset is a competitive disadvantage in a world that is changing more rapidly than ever before. We see remote work as inclusion work that, when employed by technology companies at scale, could drastically shift the economy and employee wellness across the whole country. So let’s explore the connection between remote culture, inclusion, and human performance.

The idea of Two Americas was popularized in 2004 when John Edwards talked about how different life was in the United States for those with privilege, compared to those who were living paycheck to paycheck. While it’s about the mindsets we take to the ballot box, in a Capitalist system, wealth (or the lack thereof) often guides our decision-making.

As our economy and job market have evolved, California’s GDP has exploded to be the 5th largest global economy thanks to technology. But that is not the story in most of America, where office, administrative, manufacturing, and production jobs are being impacted and many people don’t know how to make ends meet.

To require people to choose between being part of the tech economy — which is arguably the future of American wealth and opportunity — and the stability of homeownership is unfair and separates us into Two Americas.

True, there are coding bootcamps and job training programs that can help people learn new skills and become marketable for tech careers. But if companies require new employees to move to their headquarters, the wealth employees earn can’t recirculate into their local economies and we’re back to square one. Remote work gives companies access to new talent pools and offers their new employees a way to bring wealth into their local economy.

When we look at this at scale, I see a system that better supports secondary and tertiary economies while relieving pressure on big cities and tech hubs to support exploding populations with infrastructure, housing, and services.

The cost of living in key tech markets like San Francisco, New York, and Los Angeles has exploded in recent years. San Francisco has become the United States’ most expensive city, with homeownership becoming a pipe dream, even for tech workers earning six-figure salaries. This means that housing costs in tech markets are often inflated, requiring huge deposits and proof of income that far exceed the median household income in America.

Homeownership creates stability and security for people. It is directly linked to the basic needs that are foundational according to Maslow’s famous hierarchy. But property ownership, which has also been historically linked to power in the U.S., has excluded people of color from this system. For example, the Federal Reserve Bank of Boston found that African Americans are 60% more likely to be denied bank mortgages, even when their applications are essentially identical to those of white applicants. Practices like redlining and “on contract” sales that make permanent housing more difficult for people of color are still alive and well, making them more vulnerable to eviction, homelessness, and diaspora.

To require people to choose between being part of the tech economy — which is arguably the future of American wealth and opportunity — and the stability of homeownership is unfair and separates us into Two Americas.

I believe it’s part of the system of inequity that we as a country need to disrupt. By offering remote work to people across the United States, we are making the dream of homeownership accessible across the entire country.

Communities play an integral role in human connection and belonging, but one that’s usually regarded as a less-critical social need (compared to something vital, like food or shelter). For underrepresented people, communities keep their cultural identities intact through language, culture, and ritual. But I’ve been learning from many of our underrepresented employees that starting over in a new community can feel jarring, isolating, and even unsafe.

They’ve shared that it’s because, for some underrepresented people, communities often serve as a place for protection, support, and advocacy in the case of personal tragedy, persecution, or violence against an individual in the group. When seen through this lens, asking people to choose between their livelihood and their community weakens the individual and the community from which they are being separated.

What if, instead of asking people to leave their support system and come to a new place, we used remote work to bring the opportunity to that individual?

In this case, the company becomes a vehicle for connection between people across cities, cultures, backgrounds, and abilities. At Abstract, we have employees based in 30 states, including Georgia, North Carolina, Washington, Alabama, Colorado, and New York. Our employees get to live and thrive in their own communities and Abstract gains exposure to real, human ways of being and thinking that collectively make us smarter, more creative, and more empathetic. In this way, our company becomes a vehicle for connection across communities, cultures, and geographies, helping us become a better system overall.

Starting a new job and moving are two of the most stressful things a person can go through. When employees are starting a new job while uprooting themselves from their support network, they don’t have access to their community, family, or mental health services that they know and trust. This means they have to learn how to navigate their new work culture and build relationships with their team while establishing their place in a new community. They have to start over from scratch in a time when they need support the most.

This can create very real mental health challenges, such as isolation, loneliness, anxiety, and depression. But it also sets employees up to over-index on their work relationships and identity, causing people to feel like they are their jobs: a huge cultural problem in the United States.

Remote work respects the investment people have made in their lives outside of work. It enables them to stay rooted and spares them the stress of making two huge life changes simultaneously.

Most tech mythologies start with founders tinkering in a garage or hosting late-night hackathons with other like-minded individuals. These founders and early employees literally lived the product, often without the ability to separate themselves from the companies they were building. In these stories and with these companies, culture was people’s proximity to each other. Meaning that everyone outside of that space or that time in the company’s history was excluded.

I’ve seen cultures where people are continually vying to get back to “the basement” or “the apartment” or this particular office building, representing a moment in time and a level of prestige and influence. But if you look at the actual impact these cultures have on people — the daily hour-long bus commutes to and from headquarters, the services encouraging employees to live in the office, the war-room meetings that bleed into personal time, the diminishing number of women and people of color at the table, the guilt parents feel for balancing performance and their families — it’s clear that this culture is not working.

Asking people to live to work is not sustainable. It creates a burnout culture. It also breeds addiction and disconnection. While remote work isn’t the silver bullet here, allowing people to choose when and how they want to work through remote work is proven to help employees avoid loneliness and burnout, which means healthier, more viable teams.

When my co-founder, Josh, and I set out to build Abstract, we weren’t in our twenties. We had growing families that we wanted to prioritize. We wanted to make space for people to have families and flexible work schedules that allowed them to have balance. As we built our company, we started to see how remote work supports team members with other familial commitments: caring for a sick parent or grandparent, helping to raise a child in their family, supporting extended family with lesser means.

With workplace tools like Slack, Zoom, Asana, and Abstract becoming commonplace, we knew it would be valuable for our team to rely on the tools we were trying to build. But beyond the pragmatic, we wanted to give people a way to do their best work while prioritizing their families. We know that these people are great employees who know how to prioritize and get their work done efficiently. Our employees work when they are waiting for doctor appointments. They jump back online after having dinner with their family and tucking their kids in for the night. And they are modeling healthy, productive lives for their children and community — which has huge societal benefits. In fact, a Harvard study shows us that the adult children of working mothers grew up to be happier, high achievers.

Remote work is the future of inclusion

We are moving into a world where companies are the change-agents of our culture. From that standpoint, deciding to build a remote company is a deeper decision than whether or not you think people should work from home.

It is a decision that has profound impacts on employees, their families, and their communities. As more and more companies move in this direction, wealth and opportunity become better distributed throughout the country — which is exciting because that’s when we’ll see technology drive a deeper, more meaningful societal impact.

If you're a founder who cares about inclusion, building a remote culture is a great place to start. If you care about building a company that is deeply people-oriented, remote work has tremendous benefits. If you're a founder and interested in talking more about what it takes to build a remote company, reach out to me on LinkedIn. If you're a job seeker looking for a company committed to supporting the whole person, we’re hiring! Check out our open roles.